I forgot I had a blog 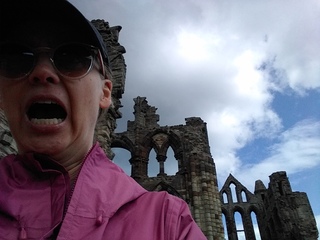 I forgot I had a blog!  (at Whitby Abbey, Whitby, England)

Has that ever happened to you?  I mean, I knew I had a blog many years ago, starting in 2000 on my very first website, in the days when no one used the word "blog" and if you did, someone would probably think you were sipping Christmas wine and trying to say "big dog" or "blurry hog" or "bugger my log" ...  And in those days, I would add to the "blurry hog" every day or two, and people would visit and say nice things...

But in the decades since...  I guess instead of a "blurry log" I have been writing other things.

I wrote a novel last year and have been working on revising it.  I like it.  It's funny.  (But revising it is not as much fun as writing it.)  And I'm writing children's poems, inspired by the fact that I got two published in a really cool hardcover collection of children's poems called "Midnight Feasts."  (Bloomsbury UK.)  Seriously, this is an awesome book.  And the illustrations are gorgeous.  And I get to appear alongside Lewis Carroll and William Carlos Williams.  I mean, wow.  (I was in one movie in my life and I had a scene with Bugs Bunny, so... it's like that!)

(Would William Carlos Williams be happy to learn he had been compared to Bugs Bunny?  Perhaps!)

I haven't been home since mid-August, which is a really funny thing.  (Ask my cat, who is at the neighbor's and who probably thinks my being away is hilarious.)  My first part of the traveling was to help out with a study-abroad program in Nottingham for Luther College.  And then, my husband flew out and joined me, and since then we have been traveling.  The UK and now in Belgium.  We stay a week at a time (or more) in once place.  We call it "slow-motion traveling."  We spent 3 weeks in North Wales because we just liked it and saw no point in moving.  (I highly recommend north Wales!!)  Last week we were in Bruges, and this week we are in Antwerp, Belgium. It's a nice way to travel, to just plop yourself in a place and "see what you can see."  I highly recommend  "slow-motion traveling."

Sorry.  I mean, about the blog thing.  I should probably keep in touch.  I do love people, and I miss my old friends.  And by old friends I mean everyone I've met here and there and who are no longer living "here," wherever "here" is.

And now that I've told you a couple of things, and seen some of the other pictures I could have uploaded, I kinda wish I had added more "blurry hogs" during the last months while traveling.

Tags: How to get writing done, Memory from days of yore
When I was in graduate school about ten years ago (really? really? ten years?) I spent a lot of time in the University of Iowa computer lab. It was a large room the size of a basketball court located on an upper floor in the main library. Most days it was full of students aged 18 - 22, and coincidentally smelled like it was full of students aged 18 - 22.  Read More
Post a comment

Tags: A Writer Sets Goals
I am sitting down to dream up my goals for the year. Honestly, I think the Prime Goal of the New Year is to experiment.

The Prime Goal and Directive #1 is to Not Fall Into the Mouth of an Active Volcano and get moltenized by molten rock. I imagine molten rock being  Read More
Be the first to comment

The Blogs of the Writer and Mammal Known as June